Ronald D. Jung spoke to the Professional Land Surveyors of Colorado, Inc., Northern Chapter in Longmont Co in February 2020 with a talk titled “Surveyor as an Expert Witness.“

I am pleased to announce that I have been elected as President of the Boulder County Bar Foundation beginning July 1, 2019. This is an honor and I look forward growing the endowment and adding to the charitable benefits to legally related charities in Boulder County.

Ronald D. Jung is pleased to have been elected to be the Treasurer for the Boulder County Bar Association in June of 2018.  He looks forward to continuing his efforts on the Board in this capacity to serve the bar and its members.

Ronald D. Jung was elected to be on the Board of the Boulder County Bar Foundation on April 19, 2018.  Having previously been a Sustaining Life Fellow for this organization, he is excited to contribute as a member of the Board.  For more information about the Boulder County Bar Foundation and the charitable purposes for the organization please see the link to the website. http://www.boulder-bar.org/foundation

Ronald D Jung was nominated and approved to be a member of the Colorado Bar Association, Real Estate Law Section Council in July of 2018.

The Real Estate Section of the Colorado Bar Association monitors and reports on judicial, legislative and other developments that affect the practice of real estate law. The goal of the section is to promote, clarify and educate members concerning issues arising in Colorado real estate law. The section keeps its members informed through quarterly real estate newsletters, special columns in The Colorado Lawyer, and numerous legal education programs, including approximately six workshops per year, quarterly topical luncheons and an annual symposium that provides a unique opportunity to learn and to renew acquaintances with fellow real estate lawyers. All Colorado lawyers with an interest in real estate can benefit from joining this section.

This Section is governed by a Council consisting of elected members of the Section and affairs are run by Officers, consisting of the Chair, Vice-Chair, Secretary and the CBA Board of Governors Representative.  The following are the current Officers, Council Members, Committee Liaisons and CBA Staff Liaisons.

Jung & Associates is pleased to announce the hiring of Graham Gerritsen as an associate attorney for the Firm.  Graham brings his business experience and acumen to the practice.  He is going to be continuing his business consulting practice and working on real estate matters.  Graham is on the Colorado Bar Association’s Cannabis Law Committee and active in his local and state bar associations.  When not working he enjoys traveling and being outdoors. He plays on the Boulder County Bar Association’s softball team.

Heal the Divisiveness, A Lawyer’s Duty

Divisiveness, the creation of disunity or dissention, is a pervasive recent trait of our American society. The cause of this trend is itself hotly debated and often creates the same level of division as the prevailing issues facing our country and society.  It has spawned new terms such as “fake news” and “alternative facts.”  Divisiveness has encouraged debate techniques which are not helpful in seeking truth or resolving conflict.  Deflection has become a pervasive tactic in every argument as though we are back on the playground justifying our own conduct by accusing someone else of something worse.  Phrases like “I know you are, but what am I?” or “it takes one to know one” should be taglines for many of our politicians. The next time you watch one of our “leaders” answer a question with a deflection, remember the answer has no relevance to the question, no matter how it makes you feel.

I have been a litigation and transaction attorney for 30 years.  Over that time, I have witnessed changes in attorney behavior during all aspects of representation.  The most pronounced is in litigation.  When I began in the late 80’s and early 90’s, it was not unusual to see lawyers viciously attack witnesses, parties and each other during depositions or even in informal meetings.  It seemed that clients wanted to watch the spectacle of their attack dog attorneys at work.  Many articles were written on the topic.  For example, see Ben Aisenberg, Countering Deposition Abuse, Colo. Law., 9-92, at 1889, 1890.  It was not uncommon to stop depositions to seek court intervention or video tape the depositions just to be able to show an attorney’s abusive conduct and seek sanctions.  Depositions were often continued, driving up the cost for the clients as judges were rarely available by phone to resolve petty disputes.  Bullying was rewarded, and the practice left clients wondering whether it was worth seeking dispute resolution at all.  These techniques led to negative public perception of lawyers and only escalated the conflict.

Effective January 1, 1995, substantial changes were made to the Colorado Rules of Civil Procedure in an effort to correct obdurate behavior of attorneys and take away the rewards for being abusive.  For a good summary of the changes see Richard P. Holme, Colorado’s New Rules of Civil Procedure, Part II: Rediscovering Discovery, Colo. Law., DECEMBER 1994, at 2711.  Following these changes, it seemed apparent that the general level of professionalism, in both litigation and transactions, advanced to a point where attorneys were actually working zealously to represent clients in a manner that was respectful of the parties, opposing counsel, the courts and the facts.  There were differences of opinion on the law and disagreements about facts, but attorneys used appropriate avenues and means to resolve differences.  Negotiation was no longer a personal attack on the other side, but an effort to compromise; an agreement to disagree.

With the recent change in our country’s demeanor, as played out on the 5:30 news every evening, I have noticed that attorneys and clients are beginning to slip back into the state where Machiavellian methods are not only accepted but encouraged by attorneys and clients.  Rules are being misconstrued and subverted while trickery and chicanery are on the rise.  This increases costs for the clients because attorneys are required to focus on anticipating what kinds of matters might be planned by the opposition and not disclosed or discussed to practice the “gotcha” style of law of the past.  While we must always anticipate our opponent’s arguments and actions, there is a difference between good strategy and hyper-analyzing every email communication for what is not being said.

The Preamble to the Rules of Professional Conduct states: “Lawyers play a vital role in the preservation of society.”  “A lawyer is guided by personal conscience and the approbation of professional peers.” “A lawyer should demonstrate respect for the legal system and for those who serve it…”   I was taught in law school that attorneys have a duty to set an example for the rest of society to instill and maintain public confidence in the judicial system; in its truth gathering and dispute resolution functions.  Our court system is called a judicial system rather than a justice system for a reason.  However, it is imperative that we strive to make it both.  This is even more important when untruths, (otherwise known as lies), and convenient lapses of memory have become a daily national discourse.   We are instrumental in seeking the truth in our profession.  As required by Rule 1.3 of the Rules of Professional Conduct, our “positions must be reasoned and supported by law and fact.”  We bear an immense burden to keep our judicial branch of government respected and fully functional, especially when under attack.  We must continue to value justice and truth above partisanship and continue to set an example of how to conduct ourselves honorably as people.

Attorneys are duty bound to lead by example.  We must endeavor to dissuade clients from merely using the legal system as a sword and employing improper means in their disputes. If we encourage or adopt society’s bad behaviors, we are complicit in perpetuating the divisive temperament we find ourselves in and in harming the judicial system.  “It is the spirit and not the form of law that keeps justice alive.” ~ Earl Warren, Supreme Court Justice.

Mr. Jung was recently honored at the Boulder County Legal Services 2016 annual luncheon and award ceremony for his extensive pro bono work over the last year. 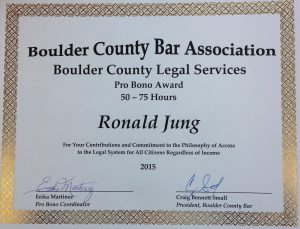 Jung Elected to Boulder County Bar Association’s Board of Directors

We are proud to announce that Ronald Jung was elected to be a member of the Board of Directors of the Boulder County Bar Association on June 5, 2015 for a three year term.